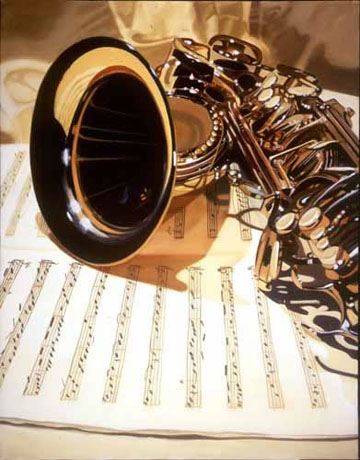 Art that tells a story

After graduating from the Columbus College of Art and Design, Denard Stalling moved to Atlanta in 1989 and started working at a gallery. There, he met Gary Handler. He had no idea that 10 years later they would be opening their own gallery together.

Today, Vinings Gallery has three locations – two in Roswell and the framing operations in Vinings, where Stallings’ studio is also located. He recalls when they first set out to find a location. They chose the nicest building in an up-and-coming area that they felt had the potential for strong growth. Today, Vinings is a neighborhood brimming with energy from the numerous restaurants, boutiques, and galleries.

“People love coming to the area and hanging out,” says Stalling.

When people visit the galleries, he doesn’t want them to feel like they’re in a museum. “We have a totally different vibe; we want you to have a great experience when you come in. Our sales staff is also very friendly.”

The galleries have been carrying Thomas Arvid’s realistic wine compositions for almost 20 years. “We represent great artists and wine is a big backdrop to what we do,” says Stalling.

Another featured artist is Simon Kenevan. They’ve been selling his seascapes for four years and he’s one of their top selling artists.

Each gallery in Roswell has a different flavor. The Elizabeth Way location has many original and limited editions, whereas the Canton Street gallery is more upbeat and where buyers can find top artists who they’ve been carrying for years.

“We’re a decorative art market. We make beautiful images. But, there is some investment potential with the original and limited edition art as well,” says Stalling.

Stalling’s art is well-represented and he will be holding his own show this fall. An illustrator and saxophone player, he is now focused on musical compositions.

“Within that illustration I try to tell a story so it’s not just a still life. There’s some movement,” says Stalling. “I combine my love of music and the appreciation for the styling of the instruments and combine that with a pretty realistic technique.”

To learn more about the galleries and artists, go to http://viningsgallery.com/.