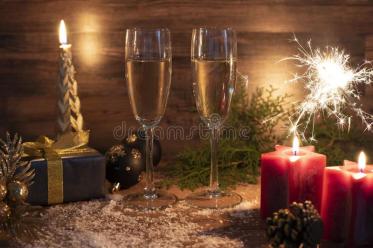 As a child, my mother or grandmother would send us out to the front porch with pots and pans to bang together at midnight to ring in the new year. Sometimes we even had noisemakers. I’m sure the neighbors loved us.

When I was in my teens and twenties, my friends and I would always try to come up with the most exciting plans for New Year’s Eve. It was the celebration of a new year ahead and a chance to experience whatever we missed the year before. Inevitably, with all the buildup, our plans never did live up to the hype.

I’m not sure what we were doing wrong, but we were usually disappointed. It was nothing like it looked on television, with everyone cheering and hugging and having a fabulous time. Clubs and restaurants were always so crowded and everything seemed to cost a lot of money. Dancing was almost impossible since you could barely move in the crowd, and conversation was difficult because it was so loud you had to shout to be heard.

As I got older, I began to appreciate quieter nights at home where I could hang out with family and good friends, eat in front of the television, and watch the ball drop in Times Square. (By the way, even though I live close to New York City, this is one place I never aspired to spend New Year’s Eve. Hours of waiting in a large crowd, sometimes in the frigid cold, was not my idea of a good time.)

My friends and I soon realized that spending time with each other and our spouses and reminiscing about good times, while staying cozy and warm, was one of the best ways to spend this momentous occasion. I knew we would be making new memories with each other in the next 12 months and hopefully would be together again at the end of it to celebrate once again.

Now, several years later, I’m happy if I can stay up until midnight. It’s not that I’m old; at least I don’t think I am. It’s just that I prefer to go to bed early.

So, when I do fall asleep before 12:00, my husband will wake me up before the ball drops to zero to wish me a good year and give me a goodnight kiss. For me, this is the perfect way to both end and start a new year.

Written for The Country Register  – distributed across the U.S. and Canada.

This holiday season, while family and friends are waiting on the turkey to roast or the ham to bake, bring out some of these special starters to hold them over until dinner time. Just be careful that they leave some room for the main course!

Healthy Holiday Appetizer
Healthy does not have to be boring. Serve these at your holiday parties and it’ll be anything but ho hum.

Butternut Squash and Feta Tartlets
These tarts are packed with so much flavor and goodness that guests won’t realize they’re actually good for them. The nuttiness of the squash combined with the tartness of the cheese will satisfy all palates.

Classic Party Appetizer
There’s a reason why this appetizer has been served at parties for many, many years. Guests are never disappointed to find this oldie but goodie laid out on the table.

Spinach Artichoke Dip
This beloved dip can be served with chips, crackers and a variety of vegetables. Include green and red vegetables, such as cherry tomatoes, peppers, and cucumbers for a festive platter. To really jazz it up, serve in a round hollowed-out pumpernickel bread.

Quick and Easy Appetizer
Add this simple appetizer to your party menu and impress your guests. No one will ever know how easy it was to make.

Cranberry Brie Pull-Apart Bread
This flavorful bread is just perfect for the holiday table. Stuffed with tart cranberries and creamy cheese, it’s a combination that’s sure to please. And it’s just so much fun to pull it all apart.

Festive and fancy appetizer
Want to add a little elegance to your party? Serve this delicious offering on a beautiful china platter.

Goat Cheese Log with Cranberries, Chives and Black Pepper
Add holiday color to your cheese plater with this beautiful cheese log. Surround with holiday-shaped crackers to make it even more special.

Fun and festive finger food appetizers for children
This appetizer is so adorable and delicious, you might have a hard time keeping the adults away from the kids’ table.

Babybel Cheese Santa Pops
It doesn’t get much cuter than this Babybel Santa on a stick. So easy to make, and children will find it hard to eat just one of these healthy snacks. To make them even more special, have the kids make them with you.

To find these recipes and more, check out the following websites: 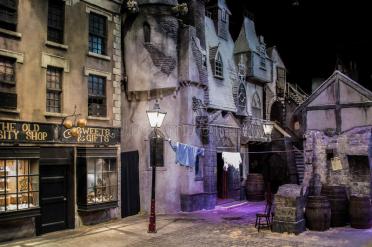 A fun and educational holiday experience for the entire family

Main Street will undergo a picturesque transformation as the 35th Annual Dickens of a Christmas Festival comes to downtown Franklin, TN the weekend of December 14. Against the backdrop of Victorian era buildings, visitors will feel like they’ve gone back in time to when Charles Dickens was alive and Tiny Tim was riding on his father’s shoulder.

“We actually have a brand new revamped section of the festival,” said Megan Hershey, Chief Operating Officer of the Heritage Foundation of Williamson County. “We’ve gotten some great feedback from our Downtown Franklin Association members as well as the general public, that they would really love Dickens to be more of a theatrical festival. That’s really what it was intended to be when it started.”

Folks dressed in Victorian era costumes and as Dickens’ story book characters will gather on sidewalks while period dancers will take over the streets. Victorian era craft demonstrations, such as candle making and weaving, will be on display, while carolers stroll by singing holiday songs. Pop-up musicians, both adults and children, will be interspersed throughout the festival playing accordions and fiddles.

“This year is probably going to be the most authentic Dickens era holiday festival that we have done. We’re really honoring it as a theatrical festival,” said Hershey.

There will also be a Holiday Town Sing, where the public can join in and enjoy their favorite holiday tunes. As there are every year, there will be plenty of activities for children and families, plus booths filled with a variety of delicious food and drinks.

The Dickens of a Christmas Festival,  sponsored by First Citizens National Bank, attracts anywhere from 50,000 to 75,000  attendees each year. As usual, most of the events are free of charge.

Carriage rides, which haven’t been a part of the festival for many years, are coming back and will most likely be stationed by the Franklin Grove Estate and Garden, which is a new project of the Heritage Foundation.

On Saturday night, at 7:00 pm, the Franklin Theater will be featuring a Christmas Carol theatrical experience featuring Jason Wood. It will be a one-man show based on Charles Dickens’ “A Christmas Carol.” Tickets are on sale now at FranklinTheatre.com.

The Heritage Foundation of Williamson County is a 501(c)(3) non-profit organization focused on historic preservation and education. The festivals in town, which also include Pumpkin Fest and Main Street Festival, were originally started as a joint venture between the  Downtown Franklin Association and the Heritage Foundation, which have now merged, as a means of bringing tourism and traffic to downtown Franklin.

“These festivals have now become part of our cultural heritage,” said Hershey.

“We have extended the Saturday hours because we think Franklin is so beautiful with all the Christmas lights and holiday decorations. Having this extended time allows us to go into the dusk part of the day so visitors will be better able to enjoy the lights,” said Hershey.

For more information on the festival, go to WilliamsonHeritage.org/Dickens. 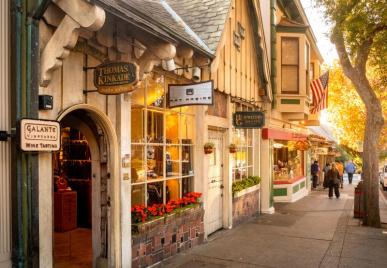 A few years ago, when I decided to take the train to work every day, my husband and I became a one car family. This was a smart financial choice because it saves a lot of money that would otherwise go to car payments, gas, and insurance costs. But, it does take some adjusting to. I can’t just pick up and go whenever and wherever I want.

The first year without a vehicle, I decided to do most of my Christmas shopping online. It was convenient and easy and everything was delivered right to my door. But something was missing; I found that I didn’t get the same joy out of finding the perfect item on a website that I did in a physical store.

During the holidays, I always loved walking around small shops trying to find that perfect gift while listening to Christmas carols and smelling cinnamon, maple, and pine scented holiday candles wafting through the aisles. Some of the local stores even had complimentary hot cocoa or cider for their customers. Shopping in these types of establishments always got me into the holiday spirt.

I also missed the customer service and having someone to assist me with picking out gifts for my hard-to-buy-for relatives. I found many of the local owners and managers, the people who actually ordered the merchandise, to be very knowledgeable and helpful. Whether it was the yarn shop where I would choose colors for a cousin who knits, a gift store that sold imported teas for a good friend, or a clothing store that had the most luxurious cashmere sweaters for a dear aunt who was always cold, these local shops provided the most high-quality and unique items.

Luckily, I now work in a town full of small independently-owned businesses. With a shopping mall only 10 minutes away, these store owners have to provide the best of the best in order to inspire people to shop locally. Although I can hear the same music at the large commercial stores, they just don’t have the personal service and little extras that make me feel appreciated. I’m just another revenue number to them, and shopping online is even more impersonal.

Now, although I still shop online once in a while, I also make sure to support local stores. Giving my business to them feels right, and it also makes my shopping experiences, especially around the holidays, much more enjoyable and festive. 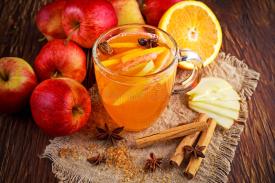 In 4-quart saucepan,  add all the ingredients except for the orange. Heat to boiling, then reduce heat and simmer uncovered for 15 minutes. Strain, then pour into mugs and garnish with fresh orange slices.

Written for The Country Register – distributed across the U.S. and Canada.